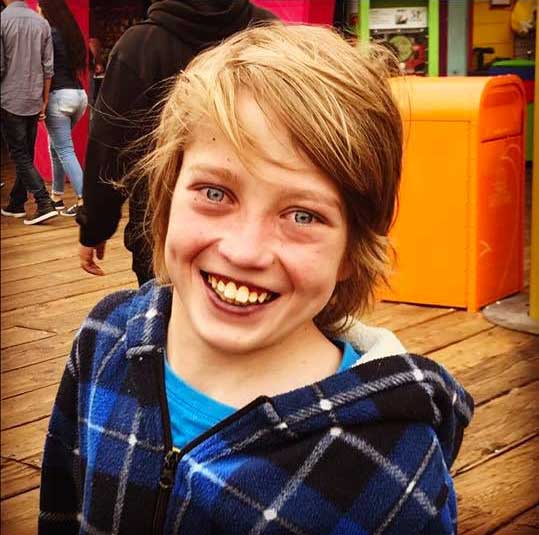 I will never forget the day we first noticed the curve in Nathan’s spine. He was standing up, balancing himself on the television cabinet with no shirt on. This was no small feat for the little guy, who, at 12 months old, had already faced more adversity than most do in a lifetime.

At 5 days old, Nathan was diagnosed with hypoplastic left heart syndrome (half a heart), and we were told to take him home and let him die. When we asked for other options, we were told about the Royal Children’s Hospital, Melbourne, Australia, and how they offered these kids a fighting chance. It was a no brainer! We boarded a plane from Perth, Western Australia, and spent the next four months watching helplessly from the sidelines as Nathan battled daily for his life. He stabilized after his second open heart surgery and we returned home to our lives in Perth.

I dismissed the curve at first. It’s probably from having his chest cracked open from the heart surgeries. This was far from the usual thoughts of a first-time mother, who wrestles with things like sleepless nights and colic! Still, I made an appointment to see our GP, who referred us immediately to the orthopaedics department at the hospital. I wish I could tell you Nathan was diagnosed with Early Onset Scoliosis at 12 months old, that he received appropriate treatment, and went on to live a normal, happy life, but that was not to be. The trauma that followed would become such an indelible part of my psyche that I would never be the same person again. Instead, Nathan and I were put on a trajectory that would forever change our lives.

For the next two and a half years, Nathan’s spine condition was undiagnosed. The curve had a mind of its own with a Cobb angle of 40 degrees. For the longest time, we simply watched the curve get worse, before Nathan was finally given a brace. With the curve now at 55 degrees, no one was listening to my concerns, my questions, and my desperation. My son was getting worse. The management of Nathan’s mysterious spine condition was in stark contrast to his heart condition where information was available and given freely. What could I do?

My Mum googled and found hope - a surgeon by the name of Dr Min Mehta in the United Kingdom, who helped kids with Early Onset Scoliosis for the last 20 years. Dr Mehta’s sweet, calm voice was in direct opposition to the news she delivered.

Dr Mehta explained that Infantile Early Onset Scoliosis is curable, but that cure comes with the caveat that children need to be treated early, ideally before the age of two. Dr. Mehta’s revolutionary treatment uses plaster jackets, harnessing the child’s rapid growth (at its peak during infancy), giving kids the opportunity to grow out of their curves. Unfortunately, for Nathan, he was now three and a half.

I took the information to Nathan’s cardiologist, who agreed that Nathan needed to access Dr. Mehta’s treatment in the United Kingdom. He was concerned the curved spine, if not treated soon, would have disastrous consequences for his heart condition. We appealed to the public and raised $20,000, and travelled to London to have Nathan treated immediately.

Anyone who knows Nathan knows that nothing goes to plan for this kid. The night before Nathan’s scheduled procedure in the United Kingdom, we received a phone call from the concerned anaesthetist who would be attending to Nathan. He felt Nathan’s underlying heart condition would pose some additional risks, so it was decided Nathan should be transferred to a larger hospital in London. We agreed and Nathan’s treatment went ahead at the new hospital. Relieved, we returned home only to find the plaster jacket was ineffective. Unfortunately, the hospital Nathan had been transferred to in London rarely performed plaster jackets, and despite their best intentions and efforts, the treatment was not holding Nathan’s curve.

Out of options and time, I called Dr. Mehta and begged her to treat Nathan herself. Dr. Mehta said that if I could find a willing orthopaedic surgeon in Australia, she would come out to Australia. It was the break Nathan needed. I returned to the hospital in Perth, yet the offer to learn from Dr. Mehta was refused, stating it was an archaic treatment. Determined, I travelled from state to state speaking to orthopaedic surgeons, finally finding Dr. Angus Gray at the Sydney Children’s Hospital, Randwick. Dr. Gray agreed and suggested Dr. Mehta attend an upcoming conference as the special guest. The conference went ahead, with many Australian surgeons learning from Dr Mehta, and many children received this treatment. We took out a loan and donated a $40,000 casting frame to the hospital to give Nathan every chance. Nathan received nine plaster jackets and spent 6 weeks in halo traction over the next 18 months in Sydney, stabilizing his scoliosis.

Although his scoliosis couldn’t be cured, we had successfully stopped the scoliosis in its tracks! However, our success was short lived. Nathan developed cellulitis (a skin infection) and the plaster jackets had to come off so it could heal. His curve rocketed up to Cobb angle 90 degrees.

Nathan was now five, and we had returned to the Royal Children’s Hospital, Melbourne, for a cardiac catheterization. This procedure was routine prior to the third and final open-heart surgery known as the Fontan for hypoplastic left heart syndrome. Halfway through the catheterization, I was called into a small conference room. The findings from the procedure were devastating. Nathan’s heart and lungs had been significantly affected by the scoliosis. Again, we were told to take Nathan home and let him die. I remember walking out of the meeting and collapsing, being caught by Nathan’s orthopaedic surgeon, who placed me on a nearby casting frame. Oh the irony!

Losing hope is, I think, the most depressing, isolating experience on this earth. Watching my son struggling to breathe with no options left sent me into a major depression. I didn’t want to continue on. I had been defeated. Your efforts weren’t good enough! You didn’t work hard enough! I told myself. My marriage ended and I was now living with my three kids in Melbourne. Our nights were often interrupted with urgent midnight trips to the emergency department. Nathan was put on a bipap machine to help him breathe. He was deteriorating fast. Nathan and I both needed a lifeline.

That lifeline came in the form of an orthopaedic surgeon. Dr Ian Torode, Nathan’s orthopaedic surgeon in Melbourne.  He told us about some new magnetic spinal rods that might suit Nathan because they were less invasive than the standard rods. We agreed this was Nathan’s only hope. However, we faced some massive hurdles getting Nathan into this surgery, including getting the device approved fast enough by the Australian Therapeutic Goods Association (TGA) to benefit Nathan. Soon he would be too sick to have any surgery at all. We put up a herculean fight, and Nathan finally got the spinal surgery. It was a success!

Finally, we were able to return to Perth, and, in between the inevitable complications that come with embarking on spinal surgery (including 4 more surgeries and chronic pain) Nathan was able to enjoyed a normal (ish) life. I dedicated my life to helping children with rare diseases, to ensure other kids did not fall through the cracks like Nathan did. I enrolled at Edith Cowan University, studied a Bachelor of Science, then a Master of Science, and am now completing my Ph.D. After my Ph.D, I will enroll in medical school to become a medical doctor. We have started the Nathan Project at Edith Cowan University to promote research for kids with rare diseases, and have collaborated with the Growing Spine Study Group (GSSG - an international study group dedicated to improving the lives for kids affected with Early Onset Scoliosis). We aim to start collecting blood samples and investigate the cause of this horrible disorder.

Left: Graduating from my Bachelor Degree at Edith Cowan University, 2012
Right: Me (far left) after presenting at an international conference with the Growing Spine Study Group in Boston, MA, 2014

This story should have a happy ending, but it doesn’t. Despite our best efforts, Nathan’s heart function is deteriorating. He has pulmonary hypertension, severe restrictive lung disease, peripheral edema, and has just been placed in palliative care. Three months ago, he lost the ability to walk, caused by the scoliosis wearing away the tendons in his hip. He is wheelchair bound and has become isolated, lonely, and depressed. It has severely impacted on my life as I try to work full time, raise a family, study, and care for Nathan’s acute care needs.

Early Onset Scoliosis appears almost innocuous. It starts as just a small curve. So what. But don’t be fooled. The collateral damage from this disorder is massive. Whilst we invest money, time, and energy into developing incredible surgeries to salvage the damage caused by scoliosis, we must recognize the impact registries (such as GSSG) can have on improving these children’s lives. Registries develop best practice guidelines, so that each child receives the same standard of care. If this were in place when Nathan was a baby, he would have been treated much sooner, with the right treatment. His live would have been very different indeed. Registries that collect blood samples also have the ability to research the cause of this disorder. We must understand this and prioritise our attentions and investments to registries. It really is the difference between life, and death. And that cost is just too high for any child. 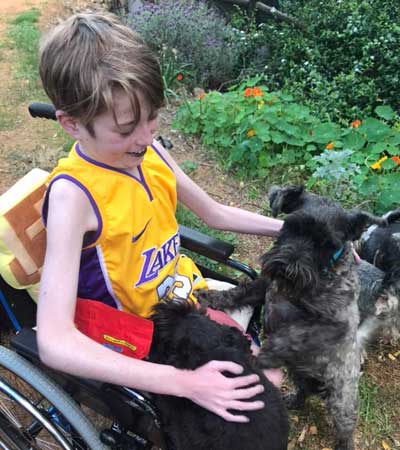 Above: Nathan, 16 years, visiting the miniature schnauzers as he awaits his puppy to be born

SDSF extends our sincer thanks to Monique and Nathan for sharing their story. We believe it teaches important truths and it was featured in our 2019 Annual Report.