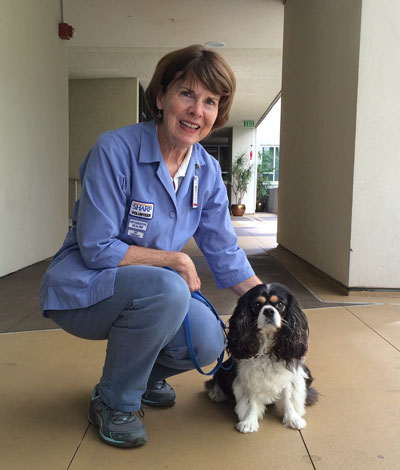 Life can be full of unexpected detours, some great and some causing stress and frustration.  No one expects to be knocked down by illness, me included.  I’m Nancy and my story began like most, a healthy happy life as a child, teen and adult.  I was never told I had scoliosis when I was young, rather, I was told it was “adult onset scoliosis,” caused by arthritic degeneration of my spine.

My life has been a busy one, starting with a career for 5 years before getting married and starting a family.  We enjoyed staying active with family and traveling as most do. I retired from my job at UCSD in 2003 upon the birth of my first grandchild.  My new “job” would be as “nanny” to my new granddaughter!

I originally experienced radiating leg pain in my mid 50’s.  At first, I just tried to ignore it, thinking it was temporary and would go away.  But it didn’t.  I was having pain with prolonged standing or walking.  Traveling wasn’t fun anymore, it hurt too much and required pain medication.  I finally sought the advice of Steven Copp, MD at Scripps Clinic who diagnosed this initial problem as arthritis in my hips. A diagnostic MRI did also show early spinal stenosis.  I had been terrified my spine was the problem, so I was thankful I didn’t need to have spine surgery!  I had a right followed by a left total hip replacement and later, a right hip revision.   I was better for a time but when I tried to increase my activity, the leg pain returned and now I was having significant lower back pain as well.  I had epidural steroid injections which didn’t help.  Dr. Copp told me I was at a crossroads: live with my increasing pain and disability, or pursue spine treatment. He took the time to show me new x-rays which demonstrated a rapidly worsening back condition.  I was too young to live with this, and, not care for or play with my grandchildren!!  My fear of spine surgery returned all over again.

I was referred for a spine evaluation with Robert Eastlack, MD, who completely put me at ease.  He patiently explained the reasons for my symptoms:  Degenerative Scoliosis.  My spine was developing arthritis that lead to my nerves being pinched while causing my spine to twist and fall off balance to the side.  My only chance to improve was to have spine surgery, and not just the smaller procedure I had anticipated, but a two-stage surgery over three days and spanning at least 6 vertebrae!  I still remember the emotional shock I felt as he delivered this recommendation.

My reality was such that I was taking ½ to 1 tablet of Percocet at least once daily and I still couldn’t stand to cook, lift or care for my granddaughter without considerable pain.  Again, Dr. Eastlack helped reassure me that I would get through it, but said that it was very common for someone my age to have bumps in the road to recovery. He cautioned that recovery wouldn’t be as easy or quick as the hip surgery.   I met with him once again, this time with my daughter, who is an orthopedic nurse.  She was such a help in asking all the right questions and, with the help of my family and friends, I decided to proceed.

My first surgery was considered “minimally invasive”.  Through 2 small side incisions, I had 4 discs removed from my lumbar spine, which were replaced with special spacers that restored the collapsed disc spaces that helped to cause my scoliosis and imbalance.  The first surgery was fairly easy to recover from and 2 short days later, I had the larger posterior procedure from T12 to S1 with rods and screws to both correct my curve as well as immobilize it to allow the fusion to heal. 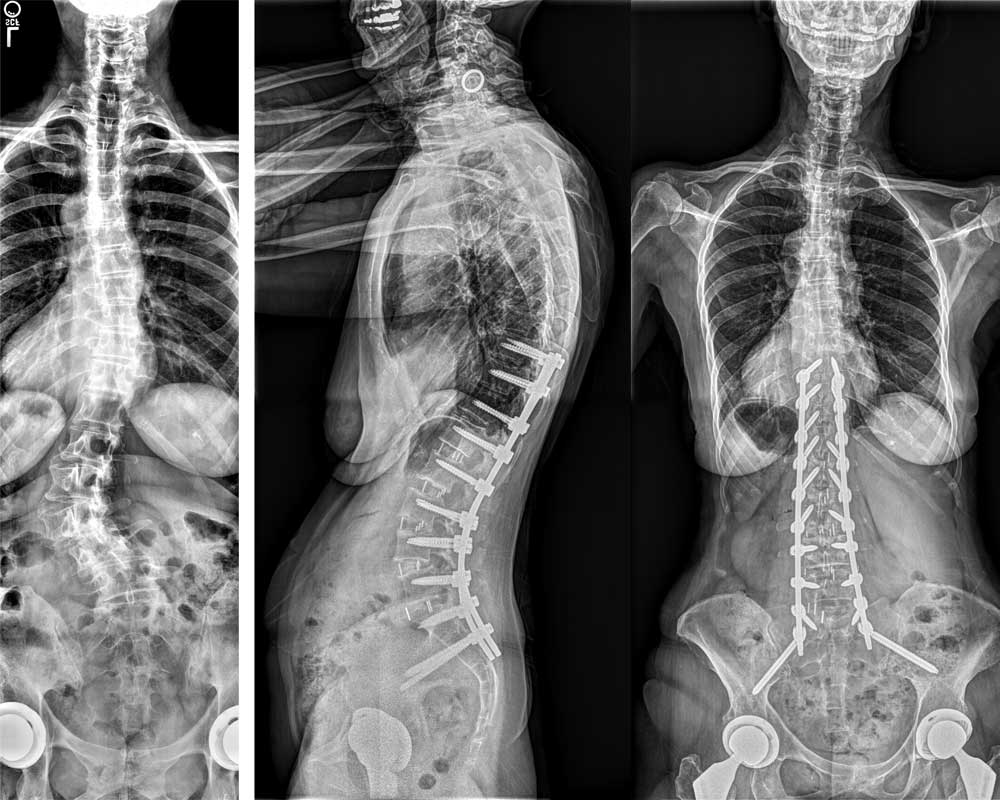 Of course, my doctor was right, there were bumps in the road.  During the first night after the second stage, I had an episode of A-Fib (atrial fibrillation), which caused my heart to beat rapidly and irregularly.  That was the scariest part of my recovery.  I remember being in the ICU asking “what did I do?!”  But everyone caring for me was so competent and reassuring.  Ultimately, the A-Fib responded to medication which restored my heart back to its normal rate and rhythm.  I also had some intermittent leg pain immediately after surgery, which I was told was completely normal and expected.  Short walks helped to relieve this discomfort.  I was also having problems emptying my bladder, which resolved shortly after my discharge.  After 10 days in the hospital, I was discharged home.

I was able to transfer directly to my home where family and friends attended to me for the first week.  Once I was home, I had home PT twice, largely to ensure my home was set up to optimize my mobility.  Outpatient P.T. commenced weeks later and continued for several months.

Over time, my leg pain subsided and my surgical pain was surprisingly minimal.  Now, I no longer need narcotic pain control!  I do take anti-inflammatory medication, but not for my spine, it helps my arthritic hands.

I was very surprised to see my standing height increase to my original height; I had gained almost 2 inches after my surgery!   Also, I didn’t realize just how painful it can be when your body is out of balance!  Those poor muscles are constantly working to correct the spine’s imbalance, and as a result, they become tired and in constant spasm.  Bottom line, my quality of life is so much better!

I’ve been asked what pearls of wisdom I can pass along to others considering surgery for a spine problem.  That’s a very good question!  Ask your surgeon to introduce you to other patients who have had similar procedures.  Talking to someone who has lived the ups and downs, can really help you mentally plan and prepare your family and friends for what’s ahead.  Now, I am happy to speak to others considering back surgery.  No offense to the doctors or nurses, who do a great job, but there’s nothing quite like talking to someone who’s lived the experience.  The more there are patient support groups, the better.  So, don’t live in fear of spine surgery, educate yourself, research your doctors and talk to patients.  The worst thing is the fear of things you don’t know. Knowledge is power!  I also emphasize the importance of seeing a qualified spine surgeon, fellowship trained in the most advanced methods of spine surgery.

For so many decades, back surgery has held fear in the hearts of many, me included, and rightfully so.  But doing nothing in the case of a spinal deformity can often lead to increased symptoms and/or disfigurement.  The new minimally invasive techniques and advanced instrumentation have led to amazing treatment opportunities and results for so many.  I feel very thankful to have benefitted from this new evolution of spine surgery. 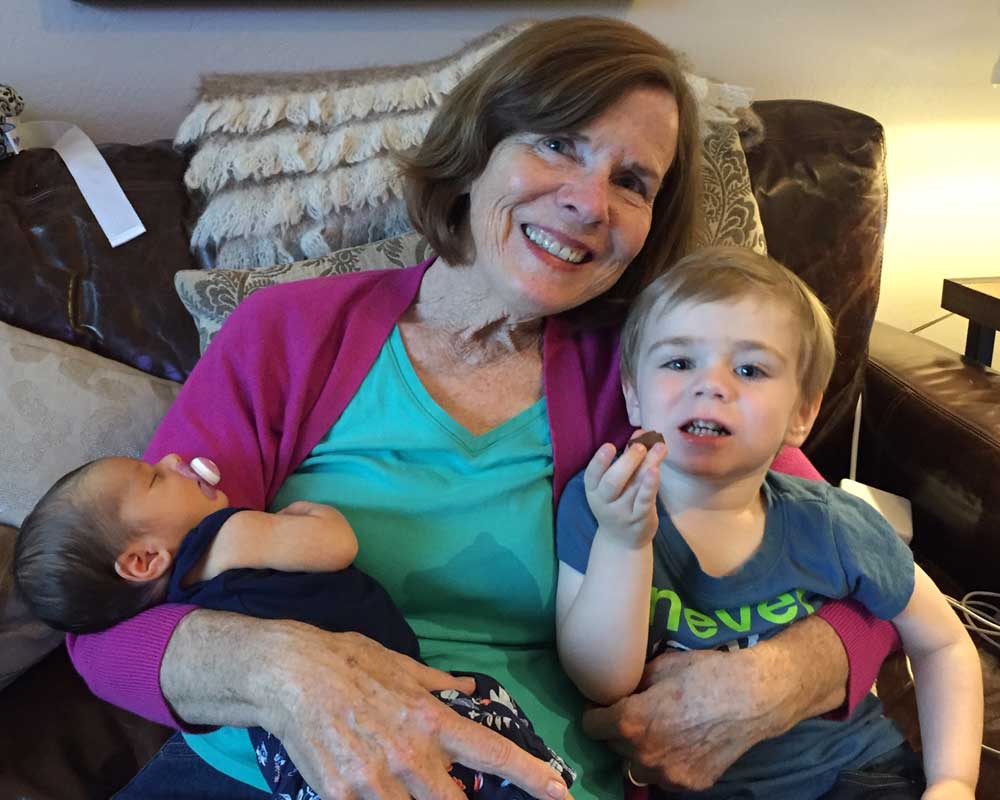 San Diego Spine Foundation would like to thank Nancy for sharing her inspirational story.