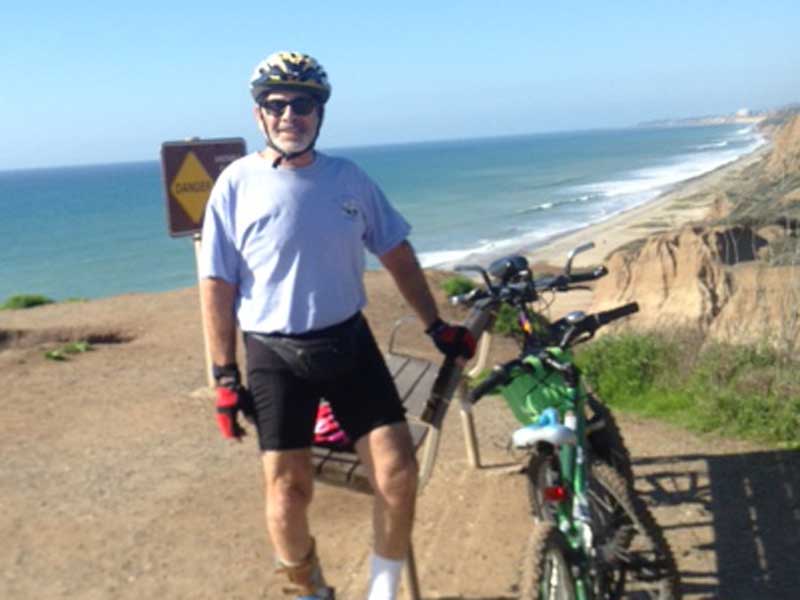 I am Michael and I simply would not have much of a life without Dr. Robert Eastlack. However, the story leading to how Dr. Eastlack made such a dramatic improvement in my life is not so simple.

Before I met Dr. Eastlack, I had a long history of spinal surgeries, 8 in all, starting in 1996. Several of them involved systemic staph infections in 2007 and 2011, both gripping my entire body, putting me in 20-day plus comas and very nearly killing me. Both episodes required long hospital stays, recoveries and rehabs, multiple surgeries to various limbs, and learning to sit up, stand and walk again. But I came through amazingly well, able to resume work, exercise and travel. It was a lot of effort, and also very hard on my wife (imagine having a 10-month-old baby and hearing doctors tell you every day that your husband might not survive and, if he does, he might not walk or think clearly again.)

Then in 2015, my previous lumbar fusion failed and things deteriorated drastically. We had just moved to Carlsbad, California so I consulted with local spine specialists, but decided it was best to use the surgeon in LA who had treated my spinal infections, including at least once when he had undoubtedly saved my life. Unfortunately, the outcome was very poor. The pain didn’t subside and the exercise program stalled. Finally, 15 months post-op, the surgeon informed me the fusion grafts had not taken.

The next few years grew increasingly painful with movement ever more difficult. Eventually, I could only sleep in a chair and over time had to replace one expensive chair with another. By 2018, searching intensely for a surgeon, a neurosurgeon at Scripps told me that I had scoliosis over 30 degrees. When he said chances of success for the operation he outlined were at best 50/50, I decided to keep looking.

It took months to get an evaluation with the chief of orthopedics at UCSD, but his recommendations did not convince my wife and I that he could actually help me. By April of 2019, I could walk no more than 6-8 steps. Sleep was elusive, pain ever present. And having consulted with numerous spinal surgeons, I did not have a viable plan to fix what ailed me.

Then, on May 2, 2019, I had a follow-up for a very successful knee surgery by Dr. Bugbee at Scripps. Before the appointment, I had an ankle to above waist x-ray. Dr. Bugbee confirmed my knee was doing well, then told me the x-ray also showed alarming spinal abnormalities. I explained that I had been searching to address the exact issues he had noted and I mentioned some of the doctors I had seen. Dr. Bugbee replied that Dr. Robert Eastlack, a Scripps surgeon, could remedy my problems. He continued that he had contacted Dr. Eastlack and made an appointment for me the very next day. (I would later write a heartfelt thank you letter to Dr. Bugbee.)

My appointment with Dr. Eastlack was remarkable. Rather than recite disclaimers and poor odds, like every other surgeon I had consulted over the prior 18 months, this doctor, with a radiant confidence, said “I can fix what is wrong with you.”

He then explained in detail how in three separate surgeries he would correct the deformities in my spine.  My wife and I left that room with hope for the first time in many months.

Before I ever met Dr. Eastlack, I had made an appointment with the surgeon who had performed my first lumbar fusion,
and my respect for him led me to follow through with that appointment. So just days before the scheduled surgeries
with Dr. Eastlack, I went to my previous spine surgeon with new sets of images and blood tests that he had ordered. When he came into the exam room, he immediately told me “You have an infection in your lumbar spine.

Your temperature is normal, and the infection is very localized. But with your history you must take your temperature every hour. Second, we can’t handle the complex issues you are presenting. There is someone in the Bay Area who might help you and another one is San Diego. Now get going.”

Another infection? Really? And I was being referred to a doctor I didn’t have confidence in. Really? But then I remembered Dr. Eastlack and his calm confidence. “I can fix what’s wrong with you.” I remembered believing him. I still had to drive home and tell my wife about the infection knowing how scared it would make her, as she had lived through my multiple staph infections. But she was a strong woman. And we had faced far worse situations together.

The next several days were anxiety provoking beyond description as I checked my temperature for signs the infection was worsening. But my temperature remained normal as we went through the pre-op checklist.

Then, finally on June 10, 2019, a 9-hour procedure was scheduled to remove the old implants in my lumbar spine, followed by the initial re-construction of that area. The surgery only took 4 hours, however, as Dr. Eastlack and his team efficiently accomplished their objectives. When he visited later, he told me that things went well and that all evidence of infection had been resolved. Amazingly, the very next day I was able to get up and walk the hallways. And the following day’s surgery, again, went much quicker than estimated, and in Dr. Eastlack’s words “very, very successfully.” I went home a couple of days later with 11 fused and instrumented vertebrae and no more scoliosis.

Recovery and rehab went as well as I ever could have hoped. Post-op incision pain was so much easier to deal with than the mind-numbing stuff I had been suffering from and it improved rapidly. Plus, I had exercises... both strengthening and stretching to work on. I knew from the earliest days that the surgeries were successful and I had been given the gift of movement again. I was walking better than I had in many years, swimming, and riding an exercycle.  But there was the third surgery looming, the cervical fusion that Dr. Eastlack considered vital. 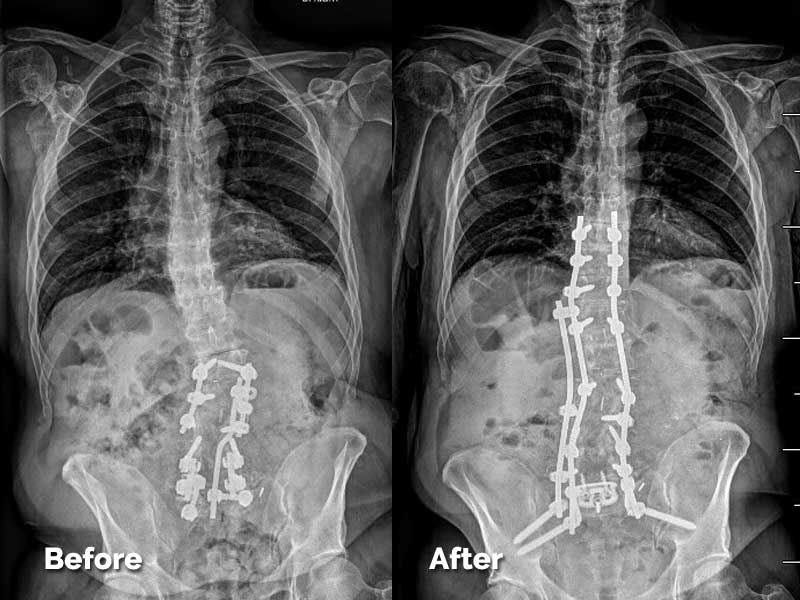 So, on May 18, 2020, I had my third surgery by Dr. Eastlack and his team, this time to correct numerous severe cervical spine issues with instrumentation and seven additional fused vertebrae.  I was up walking quickly, home in 2 days, and off all prescription pain meds in a week, as I had little discomfort. I was able to perform my daily activities so quickly that when I went to a post-op appointment, my wife made me promise to take a picture of the X-ray so that I would have proof I had actually had surgery!  It was truly amazing how rapidly I healed from this surgery. Dr. Eastlack is remarkable. Just as he said: he fixed what was wrong with me.

Now, I lead the most normal life I have in many years. I can walk for hours, garden, swim and bicycle. I drove roundtrip to Colorado and Northern California this past summer and took wonderful hikes on both trips. These are things I wouldn’t have even considered before these surgeries. And I take no pain meds of any kind. Dr. Eastlack gave me back my life.

It is not just that I had no quality of life: I was threatened with losing my life. Barely able to move and with a history of staph infections and comas and a third infection brewing in my spine, I was in a terribly precarious spot. Then Dr. Eastlack got to work………