My name is Marina. I’m 22 years old, but despite my young age, my life experiences are many. During my lifetime, I’ve had many roles: daughter, student, friend, teacher, counselor, patient and dancer. If you had to pick one, you may think “patient”, but truthfully told “dancer” is the role of my life. 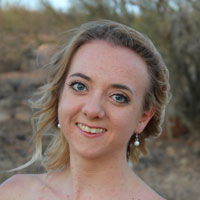 I was born with a disorder that can effect the bones in my body. It led me to have a cleft palate repair before the age of 1, long before I can even remember. I also had to have tubes in my ears as a child, as this problem can also effect the ear anatomy. It later caused my scoliosis, but more on that later.

A profound event in my young life occurred when I was diagnosed with a Wilm’s Tumor at the age of 3 years. Again, I can barely remember everything that was required of my parents and me at the time, but I know it was hard on them too. I first had surgery to remove my cancerous kidney. Following this came 15 months of chemotherapy. I remember always going to the doctor for some reason or another. The best thing was that I was cured at the end of it…. A new start! It was about a year later that I started taking dance. It was great fun and I was good at it. I found great joy in my dancing as I grew older.

When I was 8 years old, my parents were told I had scoliosis related to my disorder. More trips back to doctors and I was placed in a special body brace that helps to control the curve. For about 75% of most kids, the brace is all they’ll ever need to treat their scoliosis. For me, I faithfully wore the brace for 2 ½ years, but despite this, my curve got worse. During my early teens, I was very self conscious about wearing this bulky back brace. I would wear huge oversize jackets everyday to try and hide the brace. Looking back, I wish I could have accepted the brace more and not felt so ashamed. At least I continued to dance during my treatment and it helped me cope with the pain, the brace and the countless trips to the doctor.

Then, when I was 13 years old, I started experiencing problems with my bowels. At first the symptoms came on slowly, but then suddenly, I was in excruciating pain and I was taken to the hospital. The pain was unbearable, but until they could figure out what was wrong with me, I couldn’t have pain medication. Finally, 2 days later they discovered the problem, scarring from my Wilm’s tumor surgery had wrapped around my bowel and completely blocked it off, also referred to as a complete bowel obstruction. I was again headed to surgery to remove the scar tissue and had a bonus hernia repair and appendectomy. 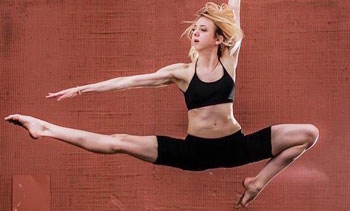 During my recovery, we were getting to know Dr. Akbarnia and his spine team in San Diego. He told my parents and I that my curve was 88° and it would continue to get worse even after I had finished growing. Only surgery could stop the progression this curve had on my spine. Having just returned to dance after my last surgery, I was told I’d have to stop again for my spine recovery. Also, Dr. Akbarnia originally thought that the majority of my spine would need to be fused along with spinal rods to correct the curve. Being so fond of dance, the thought of losing most of my low back flexibility was a very scary thing. We discussed the options with Dr. Akbarnia, who agreed to treat just the upper curve and then we would all “wait and see” if the lower curve would get worse.

Three months after my emergency surgery for my bowel obstruction, I was being wheeled to the operating room again. Its hard to express the feeling you have each time you go into the operating room and then staying in the hospital. My spinal rods and fusion were attached to my spine from T4 to L3, greatly correcting my curve. My recovery from my spine surgery was tough; I’m not going to lie. But gradually I felt better. I actually chose to repeat the 8th grade, allowing me to fully recover and allow myself to return to unrestricted dancing when I began high school.

Dr. Akbarnia was very pleased that my spine was stable and the lower curve wasn’t getting worse. The correction of my scoliosis was great and my spine was nearly straight, but despite stopping at L3, I still lost a small amount of my low back movement. Dr. Akbarnia thought it would be safe to begin my ballet bar leg work 6 months after surgery. I did this for another 6 months and finally at my one-year surgery anniversary, I was told I could completely return to my dance activities!! My happiness quickly turned to frustration as I found I couldn’t just jump back into the dance classes and activities I so easily performed before surgery. I had to reassess everything, but I was determined to succeed. I started slowly with tap and then added one element at a time. It seemed to take forever, but finally I realized I was back to the level I had been before surgery. Yes, I had limitations, but I modified and found ways to work around obstacles in my way. I was back, I was happy and I knew I wanted dance to be in my life.

I finally entered a time in my life that seeing doctors was no longer part of who I was. I graduated from high school, but decided to take a semester off of school as I was unsure what I wanted to do. Dance had always been apart of my life, but I didn’t know If I would be able to make a career out of it, and if I did, would I be successful?

Then, I started feeling strange. Dizziness, fainting started and some even thought I was having seizures. It was all very gradual right up to the day my heart nearly stopped…. 5 times in 36 hours. “Oh no, not again” was my thought. The doctors discovered I had an arrhythmia and I had yet another procedure to have a pacemaker inserted to help regulate my heart’s rhythm. I could wrap my head around this, in dance, rhythm is important. My heart needed my pacemaker almost immediately, shocking it back into normal rhythm within 24 hours after having it put there. But, I’ve been lucky not to need it again since.

Coping with the aftermath of my pacemaker surgery and the related trauma was probably one of the hardest things I’ve had to deal with. The six weeks it took to recover from the surgery really left me at a loss for who I was. I had graduated from high school, I was not dancing anymore, and I was recovering from surgery. In those six weeks I learned why I felt so lost… I wasn’t dancing! I learned that dance wasn’t just something I did all my life, it was apart of me as a person. Also, going through such a traumatic surgery, I realized life is too short to not do what you love to do. I realized I might not make a ton of money being a dancer or dance teacher, but I would love every second of it, and that is what’s important. So with those thoughts in my head I began my journey to peruse a dance education degree from Grand Canyon University. I began teaching at dance studios, and I was a part of two professional dance companies for two years.

One thing I’ve learned after each crisis with my health that lead to 20 surgeries and 500 doctors appointments: “It’s okay to not be okay”. Life isn’t sunshine and butterflies everyday. Life isn’t about being perfect. It’s about living, living your life the best way you know how, and knowing that you have the ability to make the sun come out again.

I could let my health problems define me, but I didn’t. Rather, movement defines me and I best express myself through my dance and it makes me a better person. I hope that my story will inspire others who read it, that no matter what life throws at you, you can overcome it. I hope my dance will inspire my students and those who observe my choreography as well. I have so much to share!!

So, my philosophy is “live today, how you want to be remembered tomorrow”.

Featured in the 2014-2015 our Annual Report. The San Diego Spine Foundation would like to thank Marina for sharing her story and we hope in some way it will inspire and help others struggling with spinal disorders or other health problems to overcome their challenges.