I'll always remember Karen and her mom as being incredibly strong, proud individuals. Karen is a beautiful 14-year-old young lady who resides with her family in the state of Tabasco, Mexico, and was diagnosed with scoliosis at the age of 11. She enjoys gymnastics (her favorite!), swimming and dance. Karen's scoliosis was observed by a local surgeon until the age of 12 ½ at which time curve progression led her to wear a special body brace full time (23 hours a day with an hour off for exercise and bathing). Despite being faithful to her brace treatment, the curve continued to progress, something that happens about 25% of the time. Her local orthopedic surgeon referred Karen to Mexico City-based Enrique Rosales, MD as there are no spine surgeons in her state. Through Dr. Rosales, Karen was referred to GSO for evaluation and treatment of her progressive scoliosis. 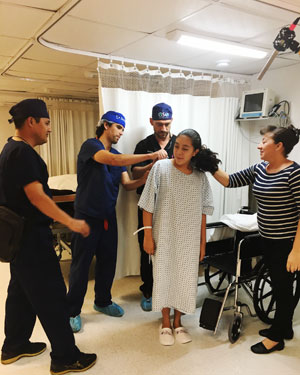 Karen's story is no different than any teenager with idiopathic scoliosis. She described feeling bad emotions and poor self-image because of the brace. She had to change her wardrobe and felt like a stiff robot, not at all herself. Other than having some back pain before brace treatment, Karen was an active, healthy teenager. She underwent surgery on Monday, one of our first cases of the week. Her surgery to correct her curve went very well and she surprised us all by standing and walking for us during rounds early Tuesday morning, less than 24 hours later. When speaking with Karen after her surgery, she expressed happiness and feeling great. She is ready to be herself again, and, to be straight. It is her hope to resume gymnastics as soon as the surgeons permit and eventually she aspires to a career in modeling, a goal that is now attainable thanks to GSO.

Karen's mother later stated that her daughter's surgery was a blessing. She understands surgery is expensive and they didn't have the resources to fund the treatment themselves. She's grateful to all involved from the local orthopedic surgeon who referred her to Dr. Rosales, who then referred her to GSO's team of doctors and professional healthcare volunteers as well as Christus Muguerza Hospital del Parque and all the donors who made her daughter's treatment possible. And, although she has extreme gratitude, she knows there are still so many children and adults who need spine care and hopes programs like GSO will be able to help them as well in the future. 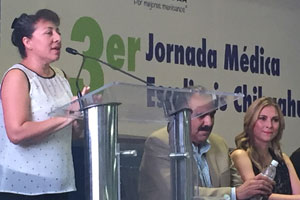 Later that week, Karen, her mother and our GSO/SDSF volunteers were all invited to attend an event hosted by regional nonprofit organizations in Mexico. Karen was the guest of honor of course; just 3 days after surgery. During the program, her mother addressed the room to express their gratitude.