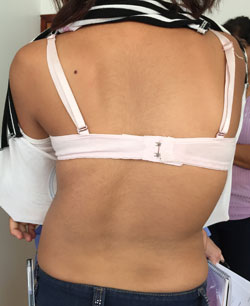 As is sometimes the case, a clinic will get a walk-in patient, someone who did not have a scheduled appointment. Alejandra is one such patient. She and her father arrived at the hospital on Tuesday after hearing about our group’s presence in Chihuahua by word of mouth from a neighbor who has a child in the program. Tuesday was a major surgery day; all our surgeons were busy in the O.R. Lesley Mundis and I were asked to screen Alejandra to see if she was a candidate. I’m not surprised very often, but I was astounded to see the severity of Alejandra’s curve. Her father reported that her scoliosis was only discovered by her family 6-7 months earlier. At that time at age 11, she was seen by a local physician who told her father there was nothing he could do, she should stop all physical activity due to risk of injury to her spine. Nothing else was offered and her father felt hopeless.

Alejandra, being an active pre-teen, is an avid soccer player. She’s your typical 11-year-old who attends middle school, adores her cat and loves to play pranks on her family and friends. Her smile is infectious. For this child to be told to stop living was beyond comprehension. Alejandra’s mother is no longer in her life, but her father and grandmother are a strong positive presence for her and they took a chance that Tuesday, praying for a miracle. 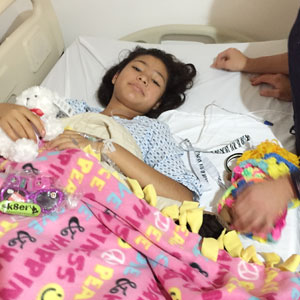 Alejandra PostOpOur screening discovered a healthy child with a rapidly worsening idiopathic-type scoliosis. New x-rays were compared to those taken 6 months earlier and found an astounding 30° of progression and worst yet, she was still actively growing. To place her on a waiting list was not an option, for at that rate, her 80+ degree curve would be well over 100° by the time the next mission trip would take place. Tough decisions were made and schedules rearranged. Alejandra was on the Operating Room schedule 2 days later. After successful surgery, her curve was corrected to nearly zero degrees.

Alejandra RecoveryAt her bedside the day after surgery, Alejandra’s father stated that his daughter’s treatment was “nothing short of a miracle. It was destiny” to hear about GSO and then have treatment within days of first being seen. Alejandra was very happy despite her post-surgical pain. Her scoliosis had been treated and she can now plan to resume her life and play soccer one day soon. Later that day, we met Alejandra’s grandparents for the first time. We all shed tears of joy as they thanked the team for helping their granddaughter have a chance for a happy, healthy life.